When my daughter was a wee bitty and I was a bit isolated in the winter cartoons gave me the break I needed to get things done. Some were just trash, others were creative and educational. I will share the ones that we loved the most for other mothers of young ones with links for them on youtube.

My absolute favorite was Aquanauts. This is a scientific cartoon about animals from all over the world that live in the sea. The stories teach you and your child about marine life, pollution, geography, and much more. All the while you are listening to many different English accents from many English-speaking countries. This is a fantastic way to learn many new things at once. I HIGHLY recommend it!

The next cartoons are Peppa Pig and its sister show Ben and Holly’s Little Kingdom. I am sure you have heard of Peppa pig. This is a seriously famous little cartoon with simple amusing art. The sister show is just the same with different characters. Both are fun-loving, puddle jumping, belly laughing, and adventurous. I didn’t mind hearing either one in the background of whatever I was doing.

Beyond cartoons there a MANY children’s books on Youtube that are educational, read by native speakers, and introduce books in a super fun way.

Here are two of my favorites.

Pete the cate is another super fun book series that teaches a myriad of useful things with excellent artwork and EVEN music. I can’t get enough of this crazy cat.

Last but not least is one of my childhood favorites, Sam I am by Dr. Suess. I have read this book until I had each prepositional phrase memorized. It is a great way to learn so many English words and meanings.

I hope you enjoyed this list of goodies.
Please don’t hesitate to like this post if you found it helpful.
If you have Questions or Comments, please leave them below. I would love to hear from you.

Blowing out candles at the big bash!

Last week we had a Serb style celebration for the little “halfling”. It turned out perfect with very little stress on my part as I realized I could do little to make it something I am used to.

What is the point of swimming up-stream only to be eaten by a grizzly? none, so I let the hubby do it all. I am not stupid. I have discovered that I can do the decorating and leave the rest to Baba and the Muz so they have the kind of party to which they are accustomed.

I made one comment on wanting to make cupcakes instead of having a cake, The reply was a firm, “NO!” There must be a cake and Baba will make it.  We all have out traditions, and apparently the Muz likes his mom’s cakes. After she makes them I always remember why. They are so YUMMY! Millie thinks so too! A two piece minimum for her at all times is to be expected.

It was a particularly long day and the little one had to have a nap during the 12 hour ordeal.

Sleeping Beauty. Notice the lace dress. She had to take it off later for more casual jumping friendly atire A.K.A. tights and a t-shirt.

Twelve hours is not the usual time for a birthday party here, but this was not a normal party. Baba and Deda arrived at noon. Some friends arrived early and then we had some very late adult arrivals. Kids had been gone for ages.

Parties here are more for the adult males than the kids I reckon.  They will tell you it is for everyone, as they ignore life around them, talk loudly, drink excessively and notice little around themselves.  I will never get over the culture shock attached to children’s birthday parties I suppose.

The end of the long evening close to midnight. Clearly a two-year old Birthday party.

I am really glad I am not a Serbian female as I was merely the baby sitter rather than the chief server and baby sitter.

As it was last year, Jumping on the bed and making the bedroom into the new playroom was part of the celebration. When they all decided to snuggle I couldn’t resist the urge to capture the moment digitally.

I think that is the best part of the party. I love that kids are so ready to snuggle and the parents let them!

Here are a few more for the Bloggy Birthday album:

Easter in the village is so much less formal than I have known Easter to be. Mind you, there are formalities. Just different ones.

Family Sets up the “picnic” under the pavilion, Neighbors wander in. There weren’t as many people as I thought. It must be an invite only kind of thing?  I don’t know.

There is tons of food, wine, and beer waiting to be consumed. The table is lined with the closest family and friends and the ceremonial bread is broken.

Wine is poured into the four crevices cut into the cake like bread. Probably to symbolize the four places Jesus was pierced with nails.  Now it is like a communion bread and wine all in one. Pieces of the bread are passed around to everyone. Incense is burned, candles are lit and food is eaten. Not all in that order. 🙂

Lighting the incense, saying a prayer. In the name of the Father, and of the Son, and the Holy Ghost.

Everyone is lined up to light their candles by the Ancient cross.

The candles they will light are a soft wax. If you hold them in your hand too long they wilt like a flower and face down. Easily remedied by straightening them out.  and letting them cool a bit.

I had to get a pic of this lady with the kerchief tied behind her head. If that outfit doesn’t scream fortune teller. I don’t know what does. But this is just her choice of clothes for the day.

The cross is  the closest thing to a church in the village. There is a church a village or two over, and then the one in town. There are lots of these crosses all over. One might be hiking through the forest and find an old abandoned cross like this from another lifetime in Serbia. The  writing on the cross is in old Cyrillic. I can’t read it.

washing their hands over and over, playing in the water.

Learning and playing the egg tapping game for the first time.

Happy Easter from our family to yours.

Today, I vacuumed our little stan (apt). I had to take out the baby safe outlet protector and thought you may like to see it. 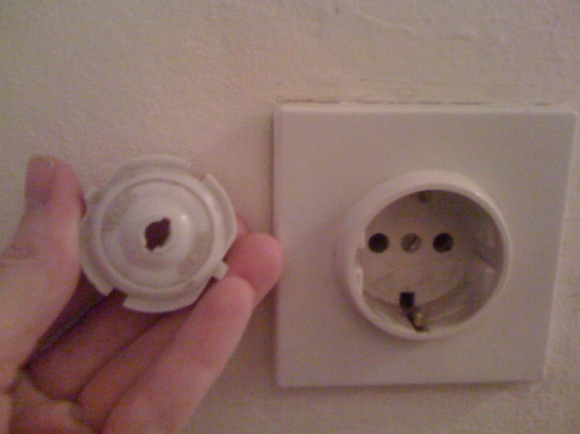 In Serbia, and maybe even the rest of Europe, it looks like this. I had been wondering about them before we arrived. I wondered if they had them. Sure enough, soon after we moved back into the stan, out came the childproof plugs.

Since we are on the topic of childproofing again. I have to say, it still cracks me up that mama had to call to ask how to open a childproof aspirin container we brought from the US.  I just saw this said container. We didn’t get her call right away so she improvised. She drilled a hole in the opening that went through the safety seal as well. To open the aspirin, she rotates the cap to the opening in the safety seal, and rotates it again to close it. Mama’s got some skills.

I know that you may think that it is odd not to have childproof lids on meds here. I may agree. But I will assert that kids are safer here in one aspect. Automatic weapons are not legal for public use. In much of Europe it is the same. Maybe even all of Europe. A man or woman will not have easy access to go on the shooting sprees we have become so sadly accustomed to hearing about lately in the U.S.

The Muz doesn’t understand why people feel the need to have more than a rifle. What do you need that much force for anyway? If you can hunt, that is great. Something that can take down so many at once is scary and as we have seen, all too often the wrong hands.

I am not sure how I feel, but I am leaning to the side of the Muz. I mean. If crazies can have automatic weapons, that lead to mass deaths. Amplifying that is like letting the late Kim il Jong have nuclear weapons.

I am happy Millie is here right now. But my heart is broken thinking of all the families whose lives have been ripped to bits by this tragedy. I am praying for all those touched by the Sandy Hook Elementary massacre.

May God grant healing and peace. And may the legislatures find an answer to the question that will tear up the nation concerning the right to bear arms.