I have joined a few FB groups in the Belgrade area, but I am at a loss for real community. I recently had an epiphany… I could start an online book club! It is an effort in sharing ideas, posting reading revelations, making friends, and finding direction for expats who have been uprooted and are trying to get their “sea legs”.

It really doesn’t matter what country you are from or where you are in the world. You just need to be able to read the book and share your thoughts on what you have read.

The first book we will read is A Career in Your Suitcase by Jo Parfitt.

The book has a great website that sports a blog, stories, resources, events and more. You can see it all here!

You can find it here: http://www.amazon.com/Career-Your-Suitcase-Practical-Meaningful/dp/1909193143

Now in its fourth edition, it has had amazing success. I think we will find it the perfect book for Expat inspiration. I went to Greece this week. It is a hop, skip, and a jump from Serbia. Well. Actually, a few hours stretched out to several hours if you are traveling with Serbians who know how to relax, have coffee and smoke like a chimney. 🙂

I was traveling with a bus trip of teachers. I was invited by my very good friend M. I am so happy I went. I made new friends. Enjoyed Greek food. and took 4 GB worth of pictures (That is 800 pics). No doubt, photography Friday will have a long Greek hang over. 😉

Today’s post is all about Meteora. This is directly from wikipedia:

The Metéora (Greek: Μετέωρα, pronounced [mɛˈtɛoɾɐ], lit. “middle of the sky”, “suspended in the air” or “in the heavens above” — etymologically related to “Meteorite“) is one of the largest and most important complexes of Eastern Orthodox monasteries in Greece, second only to Mount Athos.[1] The six monasteries are built on natural sandstone rock pillars, at the northwestern edge of the Plain of Thessaly near the Pineios river andPindus Mountains, in central Greece. The nearest town is Kalambaka. The Metéora is included on theUNESCO World Heritage List. (http://en.wikipedia.org/wiki/Meteora)

I count myself super blessed to have been able to see this natural beauty.Maybe these pics will bring a little more sunshine to your Friday.

The point of vising the Meteora was to visit a monastery atop the jutting rock formations. This is a sacred place for Orthodox people. It was a stronghold kept from the Turks who terrorized the Serbs, the Greeks, and others for centuries.

Back in the day, rope ladders were dropped to allow entrance. Also, basket like nets were let down for someone sit in. Then they were pulled up to the safety of the monastery. Now they have even cooler ways of getting from one place to another.

Seriously, that is better than the pope mobile!!

Only some of the monastery was open to the public, and pictures were prohibited in  much of that area. I am not complaining. I would rather take pics of the rock formations.

These sites don’t get old. I could snap away all day long!

Tourist do not only flock here for the monasteries. many people come from all over the world to climb these magestic monsters.

This is some impressive stuff!

Meteora was a highlight of the the trip. I would go again in a heartbeat! 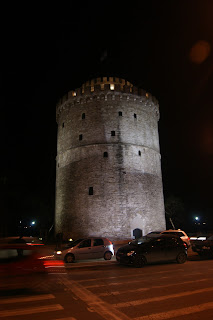