The rain is back with a vengeance.

I drove over the mountain today and the clouds sat so heavily  on the top that at some points visibility was a car length or two ahead. 😦

I always see strange sight on the road, and today was no exception. I saw a flatbed truck with only a few poles around the sides carrying a large bull and a cow. I couldn’t believe there was practically nothing keeping them on the truck bed. And this wasn’t on the small back road. This was a major highway! Culture shock! yes!

I enjoyed the day in the next big city with another expat. It was my first solo trip driving  the hour south. That is the stuff that boosts confidence.

Here, I barely drive. But back home, I drove all the time. I used to drive from the East coast to California for school! In Serbia, I am less than eager to drive. I don’t have to really, everything is so close. I walk everywhere.

The rain has caused severe flooding and loss of life.

Here is a heart warming video I found that shows some amazing animal rescues.

Rain has stopped and time has flown with crazy busy Slava prep  and celebration.  Stress is mounting from the looming trip and separation from Munchkin and hubby. Still, life is good.

Hope you are all well. 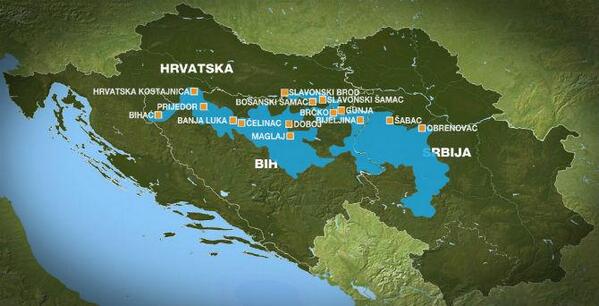