In reality, I learned this a long time ago. Our second trip to Serbia I found my long time love Tomo, meowing in the stairwell. We became inseperable. And After I had been back in the U.S. for a couple of years. He came as soon as he heard my voice.

Here is the story Tomo, my first cat in Serbia. 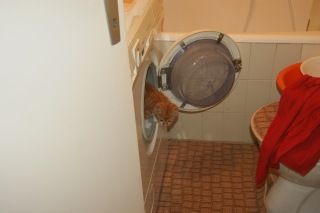 (Yes, I can do my laundry whilst sitting on the loo!)

We got a new kitten.
Tomo  a.k.a. Tomo da voz ( or Thomas the train)
He is a little spitfire tomkitten from the street.
I was was running the stairs in our apt building for the second time. And after a little while I heard a meowing coming from the first level. I thought a little kitten had gotten trapped inside so I went to investigate. There he was coming toward the steps crying, and when I bent down he came straight to me.

Then I saw a neighbor lady. The little kitten jumped straight from my arms to the arms of my neighbor. With a little hacking up of the Serbian language, I got that the cat was a stray and they just allowed him into feed him a bit and let him back out.  I wasn’t sure I understood correctly, so when she offered me the cat I declined. I misunderstand a lot. I went on running the stairs. A little while later at the bottom of the steps I saw her letting him out, I asked again in my limited Serbian,  “he is not yours?” She said no and offered him to me again. I said, maybe I will take him up to play. Needless to say, the Muz and I were instantly hooked.

The day before I had gone on the great Christmas tree hunt. I went on an adventurous hike to the nearest  Chinese store and bought a little “Charlie Brown” tree for 200 dinars, or less than $4. I brought it home and decorated it as a toy for our future kitten. Tomo loves playing with the lower branches.

Tomo had 4 lovely years with our family. He disapeared this fall while out playing in the fields. But he had a great village life and lived it to the fullest. He would not have been happy to remain an indoor cat. Once he discovered the village life and the great outdoors he was hooked. If he had remained a street cat, I am sure he would not have lived that long. R.I.P. Tomo.  You will always have special place in my heart.